..stepping into one of the greatest stories ever told and letting that story speak to you and to your life, today.

Coffee and second session 11:00am

A Prodigal Son
by Christina Rossetti

Does that lamp still burn in my Father’s house,
Which he kindled the night I went away?
I turned once beneath the cedar boughs,
And marked it gleam with a golden ray;
Did he think to light me home some day?

Hungry here with the crunching swine,
Hungry harvest have I to reap;
In a dream I count my Father’s kine,
I hear the tinkling bells of his sheep,
I watch his lambs that browse and leap.

There is plenty of bread at home,
His servants have bread enough and to spare;
The purple wine-fat froths with foam,
Oil and spices make sweet the air,
While I perish hungry and bare.

Rich and blessed those servants, rather
Than I who see not my Father’s face!
I will arise and go to my Father:–
“Fallen from sonship, beggared of grace,
Grant me, Father, a servant’s place.”

Now imagine you are in the story, either as one of the characters from the passage or an onlooker?

Imagine what you can see, hear, smell, feel, touch

How do you feel about what is happening? Why?

What is it that Jesus is saying to you through this passage? What does he want you to know?

Spend some time listening to Jesus.

Now what do you want to say to Jesus?

What do you want to take away from this time?

You might want to make some notes for yourself, to write down what you feel Jesus has said to you.

Be attentive to your feelings as you imagine the stories, often these relate to how the stories speak into our lives, perhaps even in ways we don’t openly see ourselves.

You might find it helpful to repeat the exercise and spend more time in a story. Repeating the exercise from the perspective of different characters can bring very different responses.

Jesus continued: ‘There was a man who had two sons. The younger one said to his father, “Father, give me my share of the estate.” So he divided his property between them.

‘Not long after that, the younger son got together all he had, set off for a distant country and there squandered his wealth in wild living. After he had spent everything, there was a severe famine in that whole country, and he began to be in need. So he went and hired himself out to a citizen of that country, who sent him to his fields to feed pigs. He longed to fill his stomach with the pods that the pigs were eating, but no one gave him anything.

‘When he came to his senses, he said, “How many of my father’s hired servants have food to spare, and here I am starving to death! I will set out and go back to my father and say to him: Father, I have sinned against heaven and against you. I am no longer worthy to be called your son; make me like one of your hired servants.” So he got up and went to his father.

‘But while he was still a long way off, his father saw him and was filled with compassion for him; he ran to his son, threw his arms round him and kissed him.

‘The son said to him, “Father, I have sinned against heaven and against you. I am no longer worthy to be called your son.”

‘But the father said to his servants, “Quick! Bring the best robe and put it on him. Put a ring on his finger and sandals on his feet. Bring the fattened calf and kill it. Let’s have a feast and celebrate. For this son of mine was dead and is alive again; he was lost and is found.” So they began to celebrate. 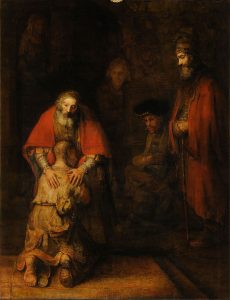 ‘Meanwhile, the elder son was in the field. When he came near the house, he heard music and dancing. So he called one of the servants and asked him what was going on. “Your brother has come,” he replied, “and your father has killed the fattened calf because he has him back safe and sound.”

‘The elder brother became angry and refused to go in. So his father went out and pleaded with him. But he answered his father, “Look! All these years I’ve been slaving for you and never disobeyed your orders. Yet you never gave me even a young goat so I could celebrate with my friends. But when this son of yours who has squandered your property with prostitutes comes home, you kill the fattened calf for him!”

‘“My son,” the father said, “you are always with me, and everything I have is yours. But we had to celebrate and be glad, because this brother of yours was dead and is alive again; he was lost and is found.”’